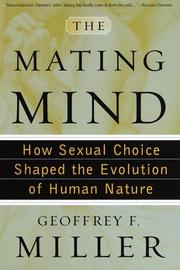 Studying the evolution of cognition and especially interested in runaway processes for Seedea:Research/Drive

Other read books linking to the TheMatingMind page :