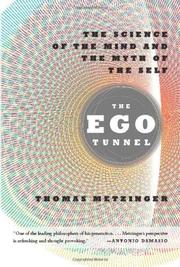 The Ego Tunnel: The Science of the Mind and the Myth of the Self by Thomas Metzinger, narrated by Kevin Pariseau, Audible 2009

Interested in cognitive science, Meditation, wrote There Is No Self 4 months before (January 2010) then finally watched his 2005 Being No One UC Berkeley conference (notes on Being No One 2004).

Other read books linking to the TheEgoTunnel page :