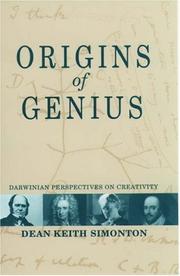 Book recommended p. 188 of The Things We Do by Gary Cziko, 2000 : "These are just a few of the studies from the considerable (and growing) body of empirical research that supports a within-organism Darwinian theory of creative thought and behavior as suggested by Campbell. The reader is referred to Simonton's recent book (1999b) for a thorough treatment of this topic."

He doesn't study only genius in art or in science but in both saying that mainly the difference is about constraints of acceptance of the work but eventually the basic processes, especially in Kuhn's revolutionary aspect of science, could be very similar (and eventually also their socio-cultural origin). Charles Darwin is used constantly as an example in the entire book.

He mentions from the start the work of Campbell, also Popper and Khun, Lorenz and the current of Evolutionary Epistemology in general.

(Or the equivalent of Cziko's extended Darwinism? Dawkins' Universal Darwinism?)

So far (Im just through half of it)... it has been a bit like "it could be this, it could be that but in all case it looks like some special situation exist so... work hard!" :-# If you have a bit of psychological disorder and come from a educated wealthy family and one of your high achieving parent died before you were 20 or so and you are the firstborn... you might be on the right path.

Several times he questioned the idea of measuring only the amount of offspring as a realistic quantification in human success. Yet, he doesn't really propose that the social position, wealth or something related could be a better indicator.

Also one of they key factor for an artist, a scientist or even a child, in all those situation somebody try to find recognition amongst his peer either by a natural advantage or by differentiation. In a way, differentiation seems to be very close to the concept of added value.

He repetitively underlines the constant ratio of work produced / famous work, suggesting also that fame could bias the analysis of past works by discarding the bad work and praising heavily the rest.

He proposes his own model in order to have :

unfortunately there is no inline reference to data or the mathematical model, just resulting generic curves. In the end he doesn't really develop how such a model could be use. To make better investment in schooling? Driving higher potential kids further?

In chapter 5 (p172) he introduces the idea of "multiples" or how discovery can be made independently yet during the same period (several examples Table 5.1). He then directly says p176 that "Rather than being the products of the individual mind, multiples are said to prove that creative ideas are the effects of the Zeitgeist, or spirit of the times."

He introduces (p206) after a long study of groups and nearly avoiding risk subject like eugenics (evoking Galton, Kroeber or Spencer and the Nazi Germany projects) a potential "Darwinian Zeitgeist" composed of :

Finally, the last chapter sums up the entire book, synthesizing each part, evaluates the entire work and concludes that there is yet no unified theoretical framework but that existing models stay extremely valuable.

Other read books linking to the OriginsOfGenius page :