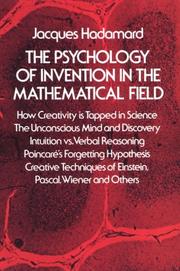 The Mathematician's Mind: The Psychology of Invention in the Mathematical Field by Jacques Hadamard - ISBN 0486201074 - Princeton University Press 1945

Being interested in creativity and convinced that mathematics, as a discipline using abstraction to solve problems, does require such a skill, unlike the nearly automated techniques taught during school. Also previously discovered some of the work of Hadamard in the history of mathematics.

Other read books linking to the The Mathematician's Mind page :