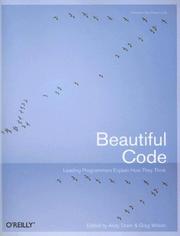 Describe in a sentences or two what motivated me to read this book.

14. How Elegant Code Evolves with Hardware The Case of Gaussian Elimination

15. The Long-Term Benefits of Beautiful Design

16. The Linux Kernel Driver Model: The Benefits of Working Together

17. Another Level of Indirection

18. Python's Dictionary Implementation: Being All Things to All People

22. A Spoonful of Sewage

29. Treating Code As an Essay

30. When a Button Is All That Connects You to the World

33. Writing Programs for "The Book"

Other read books linking to the BeautifulCode page :