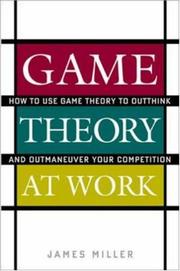 Learning more about game theory through a straightforward application.

Note that those notes comes directly from the book. Each chapter provide end-notes called "Lessons learned" that summarizes the key aspects of each chapter.

Notes up to chapter 12 come from

my mind mindmap, the last chapters are not in the mindmap.

Other read books linking to the GameTheoryAtWork page :