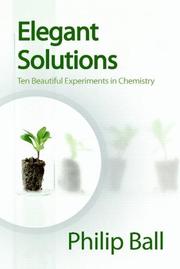 Generally wanting to improve the precision of each layer of my scientific model of reality (mainly going down the scale, from bioloy to chemistry to physics), having started the Key Experiments focusing on cognitive science and finally having already browse through The Self-Made Tapestry: Pattern Formation in Nature by the same author.

Section 3 The Art of Making Things

Other read books linking to the ElegantSolutions page :