The Logic Of Scientific Discovery {ReadingNotes} 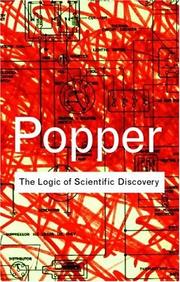 Karl Popper is a constant reference in epistemology and history of science and this is one of this major work thus had to be read.

Opening with the brilliant quote from Novalis Hypotheses are nets: only he who casts will catch.

PART I Introduction to the Logic of Science

PART II Some Structural Components of a Theory of Experience

APPENDICES (part of the original edition)

Other read books linking to the TheLogicOfScientificDiscovery page :